Of Trains and Border Controls

The train rumbled along uneventfully. The views were stupendous, albeit mostly glimpses where it was the most beautiful. I was on the famous Bar-Belgrade railway, and it had been rather frustrating. 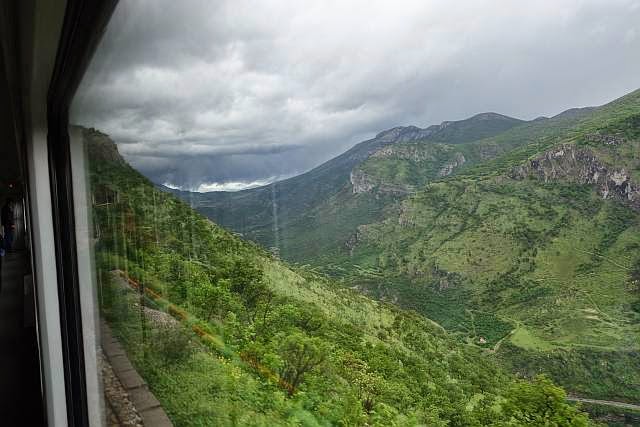 You see, the railway journey between Bar Montenegro and Belgrade Serbia passes through 254 tunnels and 435 bridges. That's some insane statistics (based on Wikipedia entry) and I certainly won't be verifying that. But in reality terms, that means that there would be frequent ins-and-outs of the tunnels and very typically, distances between the tunnels were pretty short. And so it was so darn hard to get a photo of the sceneries! Coupled with the fact that many trees grow near the rail lines which blocked the views, it was particularly frustrating that you get only glimpses of some of the spectacular valleys.

I would be content to just appreciate the views (which I did), except that for the 12 hours on the train, it was raining for the most part. Indeed, it was rather uneventful, though perhaps things would change as the train neared the border....

There were various accounts and information on travels to Serbia and Kosovo. As Kosovo is unrecognised by Serbia (and some countries, including Singapore), it would be prudent to gather some information before traveling through these two countries. Going Kosovo-Serbia may be problematic when you exit Serbia as you do not get a Serbian entry stamp. Going Serbia-Kosovo is probably ok if you are fine without a Serbian exit stamp (esp if you are not going back into Serbia). But if you had already visited Kosovo (complete with entry and exit stamps), there may be trouble with Serbian border controls when you try to enter the country. The accounts range from being turned back, to having their Kosovo stamps canceled/annulled, but yet allowed into the country!

I belong to the latter category. Having Kosovo stamps being canceled sounded interesting. The Kosovo border officials had been pretty enthusiastic about stamping my passport. "No problem! No problem!" they had proclaimed. And this was after some confusing border controls before this. I did not get any entry/exit stamps for Bosnia and Albania! (And I had enter/exit them multiple times!)

Somehow, on rail borders, my passport would usually generate additional scrutiny. Even at the Montenegrin border, the officer had to refer to a folded piece of paper. And as the train stopped at the Serbian border, the junior border officer beckoned for his senior. I tensed.

When I reached Belgrade, the rain had not relented. In fact, it seemed worse. Even in the Serbian countryside, I had seen flooding with cars/buses being stuck. The next day, I learnt that the night before, the government have declared a "state of emergency"!