"Pepsi, Fanta, Yoghurt" the waitress quipped without missing a beat.

I got momentarily confused, and she repeated her options in an almost impatient demeanor. It was lunchtime, and the crowd becoming sizable. And she doesn't seem to speak English.

I re-looked around, and then it dawned on me.

"Fanta" I replied and sat down feeling rather foolish.

I am in Cevabdzinica Zeljo, and well, a cevabdzinica sells ... cevapi, the ubiquitous fast-food found everywhere in Bosnia & Herzegovina (BiH). Apparently, the "menu" options are just size options, and your choice of drink. Every plate on the tables in the eatery is almost identical - a flatbread stuffed with mini sausages and a pool of white diced raw onions. At some point in time, I noticed some others having some sort of cheese addition in their plate. Why wasn't I give that option??


Anyway, this was actually only my second cevapi. My first was in Mostar of course, where I had just arrived from Dubrovnik Croatia. This one in Sarajevo was raved about, though I find them almost the same. While it's nice, there is just no vegetables in the meal to feel balanced. In Mostar, half of my meals were cooked food take-away from the supermarket, and eaten in my hostel. There are two reasons I liked this arrangement. One, there are almost non-existent non-smoking spaces in local eateries. Secondly, I get to have my meal complemented with local wine at the most affordable prices. That 250ml pepsi cost 2KM (~S$1.70) in the eatery while I got my 750ml bottle of Blatina in the supermarket for 5KM (~S$4.20).

The Herzegovina region of BiH is well known for their wines, and I get to try these grape varieties that I have never heard about. The Blatina semed only to be grown in these region and they're really good for the price. I also tried a Vranac, which I got for 4KM in a 1 litre(!) bottle, and this was my first bottle of wine that came sealed with a bottle-cap (as in those beer bottle caps)! Ah yes, I will be sipping wine all day!

Here in Sarajevo, there are definitely more dining options, although all suffers from the same smoky fate as in Mostar.

"Are there any non-smoking section?" I would asked, and they would reply, "Yes, yes, no problem", and the interior of whatever establishment would reek of concentrated cigarette smoke. Al fresco seemed a tad better, though only during non-peak hours where air current flows determine your state of enjoyment!

Oh, and then there's the other kind of fast food. You know, starts with letter 'M'? 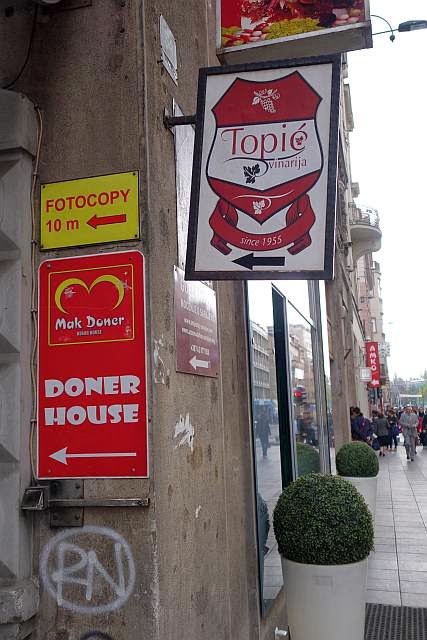